How to Fix a Leaky Shower Head

A recurrent drip-drip from your bathroom can keep you up at night—that darn leaky shower head. But do not allow the annoyance to drive you mad, get even with it. 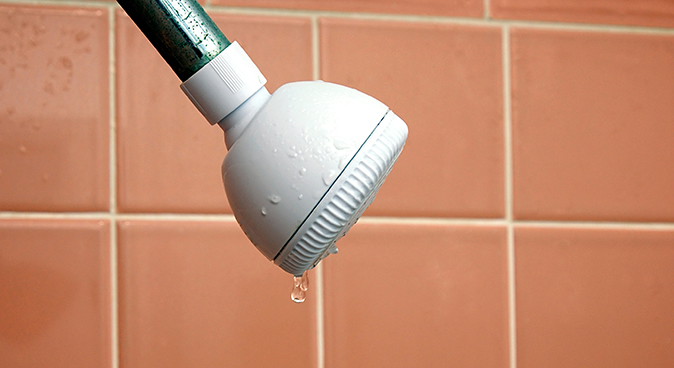 Not all Leaks Are Equal

Once you identify which leak is your specific issue, follow these simple steps to figure out how to fix your dripping shower head.

Leaking from the Shower Arm

Typically, when a leaky shower head drips from the back of the head where it meets the shower arm, the seal is no longer viable. A simple washer replacement or the addition of new or additional pipe thread-sealing tape is needed.

First, ensure you have the water shut off either in the shower area or the whole house. Use the channel-lock pliers to loosen the nut on the back of the shower head. Place the nut in a plastic container to keep track of it.. Look inside the shower head and check that there is a washer present. If one is there, inspect it to ensure it is in good shape and you can keep it. If it has seen better days, you will want to replace it.

Next, check the threads on the shower arm and shower head. You want this area free of all debris for the tightest seal. Remove any old tape if possible. If there is green or white build-up in the threads, use a soft-bristle brush (or toothbrush) and cleaning solution to scrub away the grime (white vinegar can be used in a pinch).

Once clean, starting at the opening of the arm, apply the thread-sealing tape to the shower arm threads. Tightly wrap the tape in a counterclockwise motion while slightly overlapping the previous tape application (like when you mow a lawn and overlap the previous cut). The thread-sealing tape compresses and sticks when in contact with itself, so you should see the thread shape as the tape tightens. Continue this until you have covered the threads.

Pro tip: DO NOT overdo it… at first. It is best to apply small bits of tape in stages to secure the seal as more tape can be added without much waste and effort. A little goes a long way to seal the threads in this case.

Next, screw the nut back on the shower head over the newly taped threads. Turn on the water and check the seal. If water still drips out, unscrew the shower head, thoroughly dry the area, apply another round of tape, and test. 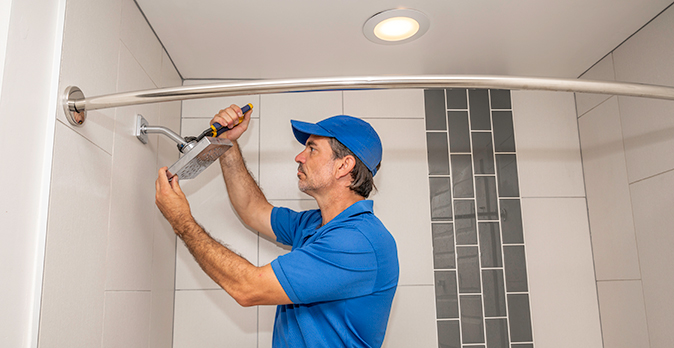 When your shower head is leaking with the water off, turn on the water and check if there are streams of water flowing from the shower head in a different direction than normal. While not necessarily a leaking shower head, this is sediment or lime buildup clogging the nozzle holes in the shower head. This problem usually builds gradually over a period of weeks, if not months, and can plug up other nozzles potentially leading to a leaky shower head down the road.

To break up the build-up:

Make sure the shower faucet handle(s) is/are in the off position or turn off the water supply valve either to the shower or house. No water should be flowing out of the shower head. If this is so, please jump to the following section, “Dripping Shower Head When Shower is Off.” Next, loosen the nut in the back of the shower head that is secured to the shower arm.

Soaking the shower head in vinegar for a few hours, or overnight, helps soften all the mineral deposits and build-up to make it easier to scrub away and open the nozzle pathways.

3. Scrub the Grime Away

Use a soft-bristle brush, or toothbrush, to scrub free all the debris and grime. Especially if there is any remaining residue or hard-to-chip-away build-up. A little elbow grease will go a long way.

Wash away the vinegar on the outside and through the back of the shower head to clean the inside of the nozzles.

5. Reinstall onto the Shower Arm

Screw on the shower head with new pipe thread-sealing tape to help create a good seal. Turn the water on to see your results and if you need to soak and scrub another round.

Another solution could be to simply replace the entire shower head by purchasing it from a home or hardware store. As a DIYer, you could not ask for a quicker, easier repair job. 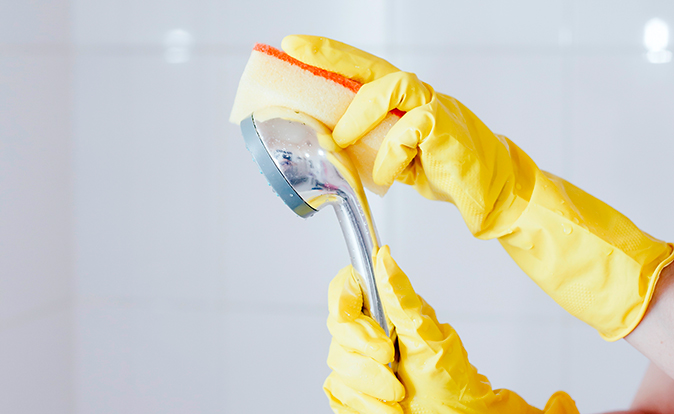 Dripping Shower Head When Shower is Off

Now for the big show. When you have a leaky shower head and the faucet is in the off position, these leaks are typically caused by a cartridge behind the handle breaking down. This cartridge controls the flow of hot and cold water to your shower head and tub spouts. They often have seats and springs, rubber gaskets, and discs, which can break down over time.

This means you need to get behind the handle(s) to replace the cartridge(s). This may seem daunting or has you considering a call to the plumber. However, this is an easy task any DIYer can “handle.”

Before starting, understand there are many different types of shower handles and cartridges, but the way to access the cartridges should be simple. Either a double or single handle will have a cap on the face of the handle that pops off easily with a flat-head screwdriver and reveals the internal handle screw. If there is no cap, you can loosen the handle by unscrewing a small hex screw around the handle. Now, don’t lose the screw. Place the screw in a plastic bag or container and safely set the container aside.

Because the handle controls the water flow, you will want to shut off water to the handle. Some homes have easy access to the shutoff valves found behind the shower. Some showers do not have accessible shutoff valves. If this is your situation, turn the water off at the main shutoff valve for your home. Whichever you have, be sure to cut the water access.

Also, it is a good practice to turn the handles into the on position to empty the pipes after turning off the water. This helps to prevent an unexpected wet disaster in your shower.

The shower faucet handle will likely have a cap at the end that you can remove by gently prying it off with a screwdriver or utility knife. With the cap off, unscrew the handle screw. You may need to use a hex wrench to remove the handle screw in some cases.

If you have a large faceplate surrounding the faucet valve, it is best to remove it for ease of access to the cartridge. Loosen and remove the mounting screws that hold the plate to the wall. You may be able to remove the plate, but you may need to cut through caulk or silicone bead around the cover plate, a.k.a., the escutcheon, in order to remove it.

Occasionally, a cartridge is held into place in the faucet cavity with a metal retaining clip. This U-shaped retaining clip can be flimsy, so carefully pry it off with a flathead screwdriver. Some models have washers present near the end of the cartridge and you will want to remove them and set them aside to add back in when you’re finished.

Pull out the existing cartridge from the faucet housing. Cartridges usually slide straight in and out without much effort.

In other instances, when they will not budge, you may need to use channel-lock pliers, or a specific cartridge puller tool, to extract the cartridge from the housing.

These cartridges differ from manufacturer to manufacturer. Finding the exact match is important to fix a dripping shower head. Bring this piece into your local hardware or home improvement store and find the proper match to replace the old one. If you already have the replacement in hand, take the next steps to replace the old cartridge.

This part is easy, simply reverse the process you did to take out the cartridge. As long as you have found an exact replica of your old cartridge, the new cartridge should slide right into the faucet cavity when aligned appropriately with the groove. After you replace the cartridge, slide in a new retaining clip (or reuse the older one that is in good condition) and replace any washers you removed previously. Finally, attach the faceplate and handle(s). Turn on the water access and check for that drip. If there is no drip, you’ve successfully learned how to fix a leaky shower head.

Protection for Your Home Systems and Appliances

Homeowners are on their own when it comes to paying for expensive repairs around the house and that includes plumbing problems that inevitably arise. First American home warranty plans can cover the repair or replacement of many home systems, including plumbing, electrical, and heating, as well as appliances such as the dishwasher, oven, and water heater, when they break down. Find out more about the protection you can enjoy with our home warranty plans or get a free quote in minutes.

This article is about...
Home Maintenance

Painting Tips Everyone Can Use

How to Clean a Dishwasher Filter in 5 Easy Steps